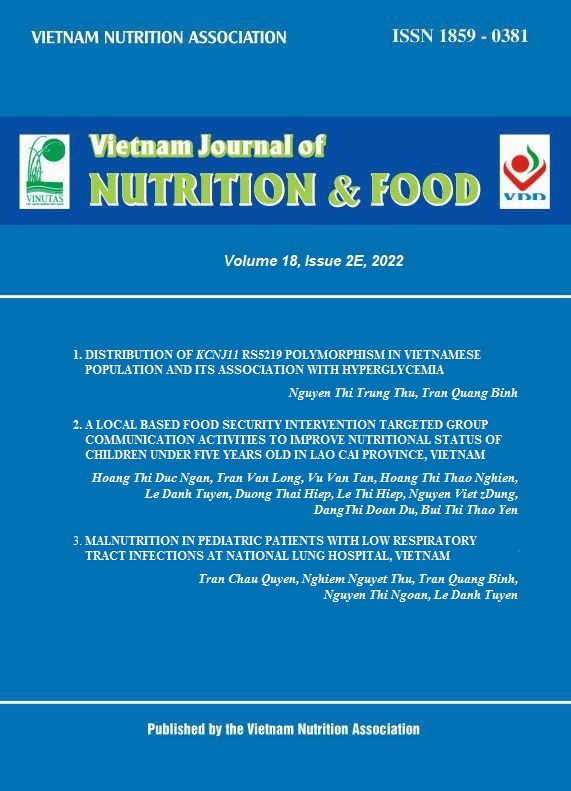 Aims: To determine the nutritional status and the dietary intake of inpatient children with lower respiratory infections.

Methods: This cross-sectional study was conducted in the pediatric ward of the National Lung Hospital in Hanoi, Vietnam, from August to December 2018. Body weight, height, and length were measured; malnutrition was defined based on WHO criteria and Subjective Global Assessment (SGA). Malnutrition prevalence is calculated to evaluate the malnutrition situation. Daily kilocalories and protein intake were documented during the first week of each child’s hospitalization.

Results: One-hundred six children were evaluated; their average was 27.2 ± 17.2 months. The prevalence of malnutrition was 30.1% based on those who were underweight (WAZ < - 2SD); 25.7% had stunted growth (HAZ < -2SD); and 17.8% were observed as wasting (WHZ < -2SD). According to the SGA, 20% of the patients were at risk for malnutrition. There was an insignificant difference in the prevalence of malnutrition in the children with tuberculosis compared to those with common respiratory infections. Children with an energy intake of more than 75% of the requirement comprised 68.9% of the participants, and 81.1% received more than 100% of the protein requirement. The intakes of energy and protein decreased gradually and each of these was significantly different (p < 0.05) on the fifth and the seventh days of hospitalization.

Conclusions: Underweight was the most critical concern in children with infectious lung diseases, including tuberculous pneumonia. Protein and energy intake levels decreased gradually and significantly on the fifth and seventh days of  hospitalization.